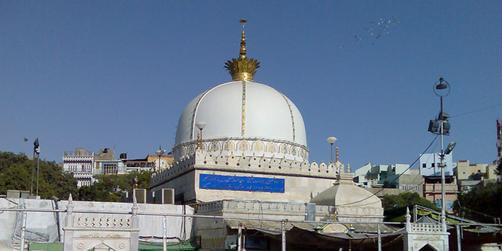 The dargah of Khwaja Moinuddin Hassan Chishty (R.A) ( Gharib Nawaz -Benefactor of the Poor), known as Ajmer Sharif Dargah or Ajmer Sharif, is an international waqf, an Islamic mortmain managed by the Dargah Khwaja Sahib Act, 1955 of the government of India. Ajmer Sharif Dargah is 2 kilometres (1.2 mi) away from the main central Ajmer Railway station and situated at the foot of the Taragarh hill, and consists of several white marble buildings arranged around two courtyards, including a massive gate donated by the Nizam of Hyderabad and the Akbari Mosque, built by the Mughal emperor Shah Jahan. It contains the domed tomb of the saint. Akbar and his queen used to come here by foot on pilgrimage from Agra every year in observance of a vow when he prayed for a son. The large pillars called “Kose (‘Mile’) Minar”, erected at intervals of two miles (3 km) along the entire way between Agra and Ajmer mark the places where the royal pilgrims halted every day. It has been estimated that around 150,000 pilgrims visit the site every day..

The dargah (shrine) of Khwaja Moinuddin Hassan Chishty is an international wakf (endowment), managed under The Dargah Khwaja Sahib Act, 1955 of Government of India. The Dargah Committee, appointed by the Government, takes care of the maintenance of the shrine, and runs charitable institutions like dispensaries, and guest houses for the devotees but do not care take the rituals of the main shrine (Mazar sharif/Astana e Alia) which is under the custody of hereditary priests known as Khadims.Type your paragraph here.