Khawaja Qutub-ud-din Bakhtiyar Kaki Rehmatullah-alaihi was the chief Khalifa of Hazrat Khawaja Moinuddin Chishty. He was born in 1111AD or 569 Hijri at Aush in Iraq 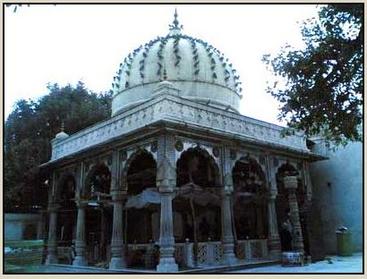 Khawaja Qutubuddeen Bakhtiyar Kaki He was a great devotee and mystic. He had no parallel in abandoning the world and facing poverty and hunger. He kept himself engrossed in the remembrance of Allah. Whenever someone came to him he would show his inability to continue any longer and slipped into the same state again.

When Hazrat Khawaja Mueen-ud-deen Chisti came to Isphahan he took oath of allegiance on his hands and got caliphate and khirqah (dress of a religious mendicant) from him. Thereafter his master asked him to go to India and stay there. Following this order he came to Delhi and stayed there. It was the period of Sultan Shamsuddin Altamash.

He would sleep at night only after reciting Darood 3 thousand times.

When Khawaja Sahib Married for the first time in Aush (Iraq) he was unable to recite the Darood for the first 3 nights, On the fourth day he saw the Holy prophet Muhammed (saw) asking that he missed the gift of Darood which he was being offered since a long time, Khawaja Qutub-ud-deen Kaaki divorced his first wife as he considered married life hindrance in his prayer. From his second wife he had 2 sons.

In the beginning he would take loan from the grain seller however he would not exceed 24 dirham. And in the meantime he would pay back from the offerings made to him. However once he stopped taking loan. From that day on bread would come out from under his prayer mat and his family members lived on it.

Meanwhile the grain-seller thought that the Khawaja must have been angry with him and hence he stopped taking loan from him. In order to know the fact he sent his wife to the house of Khawaja. Khawaja wife revealed truth to her from that time the bread stopped.

Once Khawaja Qutub-ud-deen Kaaki and the members of his house remained hungry for 4 days without anyone realizing that they hadn’t eaten, in his innocence his son disclosed this to one of Khawaja well wisher who prepared food at home and brought it before Khawaja Qutub-ud-deen Kaaki who became furious and cursed his son who died later. However became alive in a few days.

Shaikh Nur Baksh has written in the book “Silsilatuz’zah”-

“Bakhtiyar Aqtaab Aushi was a great devotee, mystic and friend of Allah who remained in his remembrance in private and public. He was habituated to eat and sleep less and spoke rarely. He was a towering personality in the world of mysticism.”

Once Khawaja Qutub-ud-deen Kaaki wanted to be in Ajmer to pay reverence to Khawaja Gharib Nawaz (Ra), he got a reply to come over as this would be their last meeting. On arrival at Ajmer and paying tribute to Khawaja Gharib Nawaz (Ra) he was informed that these were his last days. Khawaja Gharib Nawaz (Ra) handed over the authority to Khawaja Qutub-ud-deen Kaaki and appointed him successor, and presented the turban, Musalla and walking stick (Aasa) and a book of the Holy Quraan. Informing that these were the belongings of the holy prophet Muhammed Mustafa Salai Allahu Alaihi Wa Sallamu, as they were to be preserved and handed over since generations to the Chistia Silsila. Khawaja Qutub-ud-deen Kaaki returned to Delhi and devoted himself to prayers and Namaz.

Once while sleeping he saw his peer Khawaja Gharib Nawaz (Ra) in a pleasant mood and he was attentive to his Mureeds even after Pardah.

Once Hazrat Suleimaan Alaaihisalaam was passing on his flying throne by the place where the present Mazaar is situated he noticed the place to be lit up and the light extended up to the skies. Hazrat Suleimaan Alaaihisalaam realized that this was the place where Allah’s beloved Khawaja Qutub-ud-deen Kaaki who would be laid to rest and he would be from the Ummat of Prophet Muhammed Mustafa Salallahu alaihi wa salamu.

Hazrat Shaikh Nizamuddeen Auliya would come at a point and stand at a stone and offer salaam and greetings the stone is located at the main Entrance of Dargah Sharief Mehrauli.

One day there was a mehfil e Sama in Shaikh Ali Sanjari’s place 10 Rabi ul Awal, where the following Qawaali of Hazrat Ahmed Jaam was being sung “Kustgaan khanjar taslimra harzama az gaib jane deegar ast”
Khawaja Qutubuddeen Kaaki was in a state of trance for the next two days and was reciting the same verse. On the fifth day Khawaja Qutubuddeen Kaaki took Pardah. “Inna Lillahi va Inna Ilaihi Raajiuun”

Khawaja Qutubuddeen Kaaki took Pardah at the age of 64 years in 633 Hijri 14 Rabi-ul Awal (1235 AD) and his Mazaar (Moinul Hatab) is at Mehrauli (New Delhi) which attracts devotees from all over India and world.

According to Khawaja Qutubuddeen Kaaki’s will only the person who had not missed the Sunnah salat of Asar Namaz never delayed the time of Namaz (Takbeer e ullah) and never done a single unforbidden act in his life was eligible to lead the Namaz e Janaza. There was a long silence as none thought themselves to be capable. After much wait Hazrat Khawaja Sultan Shamsudeen Altamash came forward and expressed that he did not expect his secret to be opened in this manner and led the Namaz e Janaza. The Mazaar Sharief of Khawaja Qutub-ud-deen Kaaki has a story to it, as per his will he had asked his Mureed’s Baba Fareed and Khawaja Shamsudeen Altamash to get mud from “Shamsu Taalaab” to put over his grave. This they did, as they ran back and forth from the Mazaar to the lake and collected mud from the lake in the basket which they carried over their heads. It was raining very heavily and the mound of mud was flowing away due to the downpour. Baba Fareed made a demarcation and put 4 wooden stumps on all the four corners to mark the place where the Mazaar was located.

Khawaja Qutub-ud-deen Kaaki did not want a tomb to be made big with walls, or open to public. All the rulers’ right unto 18th century kept his will, however Muhiuddeen Bahadur Shamsul Umra Kurshid of Hyderabad built the pillars and the Gumbaad over the Mazaar as it appears now. And it is decorated with mirrors from within.