Ab’ul Hasan Yamīn al-Dīn Khusrow better known as Amīr Khusro Dehlawī was an Indian musician, scholar and poet of Persian descent. He was an iconic figure in the cultural history of the Indian subcontinent. A Sufi mystic and a spiritual disciple of Nizamuddin Auliya of Delhi, Amīr Khusro was not only a notable poet but also a prolific and seminal musician. He wrote poetry primarily in Persian, but also in Hindavi. 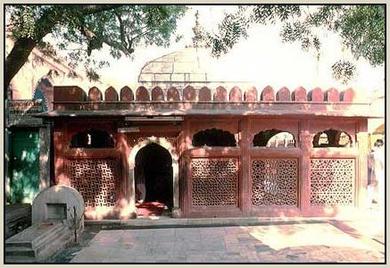 He is regarded as the “father of qawwali” (the devotional music of the Indian Sufis).He is also credited with enriching Hindustani classical music by introducing Persian and Arabic elements in it, and was the originator of the khayal and tarana styles of music.The invention of the tabla is also traditionally attributed to Amīr Khusrow. Amir Khusrau used only 11 metrical schemes with 35 distinct divisions. He has written Ghazal, Masnavi, Qata, Rubai, Do-Beti and Tarkibhand.

A musician and a scholar, Amīr Khusrow was as prolific in tender lyrics as in highly involved prose and could easily emulate all styles of Persian poetry which had developed in medieval Persia, from Khāqānī’s forceful qasidas to Nezāmī’s khamsa. His contribution to the development of the ghazal, hitherto little used in India, is particularly significant. 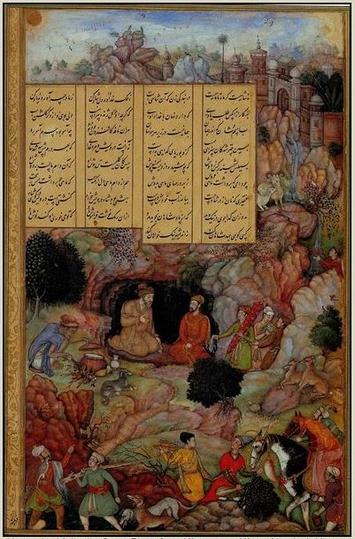 Alexander Visits the Sage Plato, from Khamsa-e-Nizami by Amir Khusro

Early life
Amīr Khusrow was born in Patiali near Etah in northern India. His father, Amīr Sayf ud-Dīn Mahmūd, was a Turkic officer and a member of the Lachin tribe of Transoxania, themselves belonging to the Kara-Khitais.His mother was the daughter of Rawat Arz, the famous war minister of Balban, a king of the Mamluk dynasty (Slave dynasty) (1246-87) who belonged to the Rajput tribes of Uttar Pradesh.

Career
Major life events in chronological order
1253 Khusro was born in Badaun near Etah in what is today the state of Uttar Pradesh in northern India. His father Amir Saifuddin came from Balkh in modern day Afghanistan and his mother hailed from Delhi.
1260 After the death of his father, Khusro went to Delhi with his mother.
1271 Khusro compiled his first divan of poetry, “Tuhfatus-Sighr”.
1272 Khusro got his first job as court poet with King Balban’s nephew Malik Chhajju.
1276 Khusro started working as a poet with Bughra Khan (Balban’s son).
1279 While writing his second divan, Wastul-Hayat, Khusrau visited Bengal.
1281 Employed by Sultan Mohammad (Balban’s second son) and went to Multan with him.
1285 Khusro participated as a soldier in the war against the invading Mongols. He was taken prisoner, but escaped.
1287 Khusro went to Awadh with Ameer Ali Hatim (another patron).
1288 His first mathnavi, “Qiranus-Sa’dain” was completed.
1290 When Jalal ud din Firuz Khilji came to power, Khusro’s second mathnavi, “Miftahul Futooh” was ready.
1294 His third divan “Ghurratul-Kamal” was complete.
1295 Ala ud din Khilji (sometimes spelled “Khalji”) came to power and invaded Devagiri and Gujarat.
1298 Khusro completed his “Khamsa-e-Nizami”.
1301 Khilji attacked Ranthambhor, Chittor, Malwa and other places, and Khusro remained with the king in order to write chronicles.
1310 Khusro became close to Nizamuddin Auliya, and completed Khazain-ul-Futuh.
1315 Alauddin Khilji died. Khusro completed the mathnavi “Duval Rani-Khizr Khan” (a romantic poem).
1316 Qutb ud din Mubarak Shah became the king, and the fourth historical mathnavi “Noh-Sepehr” was completed.
1321 Mubarak Khilji (sometimes spelled “Mubarak Khalji”) was murdered and Ghiyath al-Din Tughluq came to power. Khusro started to write the Tughluqnama.
1325 Sultan Muhammad bin Tughluq came to power. Nizamuddin Auliya died, and six months later so did Khusro. Khusro’s tomb is next to that of his master in the Nizamuddin Dargah of Delhi.

Khusro the Royal poet
Khusro was a prolific classical poet associated with the royal courts of more than seven rulers of the Delhi Sultanate. He is popular in much of North India and Pakistan, because of many playful riddles, songs and legends attributed to him. Through his enormous literary output and the legendary folk personality, Khusro represents one of the first (recorded) Indian personages with a true multi-cultural or pluralistic identity.

He wrote in both Persian and Hindustani. He also spoke Arabic and Sanskrit. His poetry is still sung today at Sufi shrines throughout Pakistan and India.

Amir Khusro was the author of a Khamsa which emulated that of the earlier poet of Persian epics Nezami Ganjavi. His work was considered to be one of the great classics of Persian poetry during the Timurid period in Transoxiana.

Amir Khusro and the origins of the Sitar and the Tabla
Amir Khusro is credited with fashioning the tabla as a split version of the traditional Indian drum, the pakhawaj.

Popular lore also credits him with inventing the sitar, the Indian grand lute, but it is possible that the Amir Khusro associated with the sitar lived in the 18th century (he is said to be a descendant of the son-in-law of Tansen, the celebrated classical singer in the court of the Mughal Emperor Akbar). See Origin Of Sitar and About Sitars.

Some samples of Khusro’s poetry

I am a pagan (worshiper) of love: the creed (of Muslims) I do not need;
Every vein of mine has become (taut like a) wire; the (Hindu) girdle I do not need.
Leave from my bedside, you ignorant physician!
The only cure for the patient of love is the sight of his beloved –
other than this no medicine does he need.
If there be no pilot on our ship, let there be none:
We have God in our midst: the pilot we do not need.
The people of the world say that Khusrau worships idols.
So I do, so I do; the people I do not need,
the world I do not need.

Khusro! the river of love has a reverse flow
He who enters will drown, he who drowns will get across.

Seeing the empty bed I cry night and day
Calling for my beloved all day, not a moment’s happiness or rest.

Is known by both masculine and feminine names,
And lightens up (or burns up) without rain;
Originates from a man and goes into a man,
But no one has been able to guess what it is.

With the blow of wind she flares up,
And dies as soon as she drinks water;
Even though she is a pretty woman,
She’s not a woman, though she’s feminine.

Do not overlook my misery
Blandishing your eyes, and weaving tales;
My patience has over-brimmed, O sweetheart,
Why do you not take me to your bosom.

The nights of separation are long like tresses,
The day of our union is short like life;
When I do not get to see my beloved friend,
How am I to pass the dark nights?

Suddenly, as if the heart, by two enchanting eyes
Is beset by a thousand deceptions and robbed of tranquility;
But who cares enough to go and report
To my darling my state of affairs?

The lamp is aflame; every atom excited
I roam, always, afire with love;
Neither sleep to my eyes, nor peace for my body,
neither comes himself, nor sends any messages

In honour of the day of union with the beloved
who has lured me so long, O Khusrau;
I shall keep my heart suppressed,
if ever I get a chance to get to his place

Works
Tuhfa-tus-Sighr (Offering of a Minor) his first divan, contains poems composed between the age of 16 and 19
Wastul-Hayat (The Middle of Life) his second divan, contains poems composed at the peak of his poetic career
Ghurratul-Kamaal (The Prime of Perfection) poems composed between the age of 34 and 43
Baqia-Naqia (The Rest/The Miscellany) compiled at the age of 64
Qissa Chahar Darvesh The Tale of the Four Dervishes
Nihayatul-Kamaal (The Height of Wonders) compiled probably a few weeks before his death.
Qiran-us-Sa’dain (Meeting of the Two Auspicious Stars) Mathnavi about the historic meeting of Bughra Khan and his son Kyqbad after long enmity
Miftah-ul-Futooh (Key to the Victories) in praise of the victories of Jalauddin Khalaji
Ishqia/Mathnavi Duval Rani-Khizr Khan (Romance of Duval Rani and Khizr Khan) a tragic love poem about Gujarat’s princess Duval and Alauddin’s son Khizr.
Noh Sepehr Mathnavi. (Mathnavi of the Nine Skies) Khusrau’s perceptions of India and its culture
Tughlaq Nama (Book of the Tughlaqs) in prose
Khamsa-e-Nizami (Khamsa-e-Khusrau) five classical romances: Hasht-Bahisht, Matlaul-Anwar, Sheerin-Khusrau, Majnun-Laila and Aaina-Sikandari
Ejaaz-e-Khusrovi (The Miracles of Khusrau) an assortment of prose compiled by himself
Khazain-ul-Futooh (The Treasures of Victories) one of his more controversial books, in prose
Afzal-ul-Fawaid utterances of Nizamuddin Auliya
Ḳhāliq Bārī a versified glossary of Persian, Arabic, and Hindawi words and phrases attributed to Amir Khusrau, but most probably written in 1622 in Gwalior by Ẓiyā ud-Dīn Ḳhusrau
Jawahar-e- Khusrovi often dubbed as the Hindawi divan of Khusrau
Laila Majnu
Ayina-i-Sikandari
Mulla-ul-Anwar
Shrin-wa-Khusrau