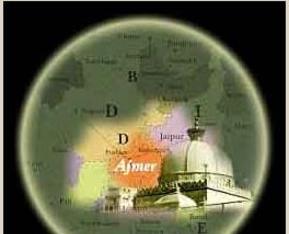 The great Walli of Allah Hazrat Khawaja Baba Gharib Nawaz (R.A) marched toward India, Along with his disciples (Mureds) armed with love of Allah and blessing of Nabi- Huzoor (S.A.W). He first reached Hearat from their he reached Sabzwar the ruler of sabzwar Shaik Mohammed Yadgar was very tyrant and of bad character, but when he came in contacted of this Wallie he was greatly ashamed of his past misdeed and pleaded with Gharib Nawaz (R.A) to show him the right way. Gharib Nawaz (R.A) was kind enough and show him the way which headed toward Allah later on this king left all the worldly pleasure and became the disciple of Hazart Khwaja Gharib Nawaz (R.A).

The caravan of saints of Allah was now on the border of India. Sky high mountains were in the way but the perfect determination of Khwaja Shaib (R.A) could not be deferred. With the name of Almighty, he stepped into mountains and after passing through the hills, valleys and other hindrances he arrived at the border area of Punjab.

At that time, when Khwaja Sahib entered India, King Shahabuddin Ghauri was defeated by Prithviraj and his army retreated to Ghazni. people asked Khwaja Sahib (R.A) and his companions not to proceed further as the king of Muslims had been defeated. But all the Saints of the group said : “You were dependent on swords but we have faith in Almighty.” Thus the caravan reached at the bank of Ravi river after passing through Fort Shadman and Multan.

Across the Ravi was located Lahore the capital of Punjab and the high rise spires of temples were telling the tales of splendor of the city. They crossed river and stayed at the mazar of Hazart Ali Bin Usman Hijweri, known as Data Ganj Bakhsh (R.A) just out side city wall.

Hazart Data Ganj Bakhsh (R.A) was one of the greatest saints of his time. So Khwaja Sahib (R.A) sat in Etekaaf and spiritually benefited himself and left. Leaving this place he recited the following verse :

The extemporary composed verse” is a reflection of his real sentiments and so it became so popular that even nowadays, people recite it whole heartedly as a duty.

After leaving Lahore, Khwaja Gharib Nawaz (R.A) reached Samna (Patiala) and stayed there. Though apparently, people there were sympathetic but in reality they were enemy to him and wanted to harm him. and the mother of Prithviraj, King of Delhi and Ajmer was an astrologer and after having knowledge through her astrology, she informed her son about signs of a person who will be the cause of his destruction. In view of this prediction, the king asked the artists to sketch the person who resembled Khwaja Gharib Nawaz (R.A) and sent these sketches to all the border areas. He also ordered his men to kill the person resembling with sketch as and where found.

Thus when Khwaja Gharib Nawaz (R.A) reached Samna, King’s men seeing the resemblance, tried to stop him. But Khwaja Sahib (R.A) comprehended their inner feelings through Divine inspiration. So he along with his companions slipped from the hands of their enemies safely.

Ajmer Sharif Darbar Khwaja Baba Garib Nawaz Chishty (R.A) Arrival in Ajmeri, India
Ajmer Sharif Darbar Khwaja Baba Ajmer India
On reaching Ajmer, Hazrat Khawaja Baba Garib Nawaz rested under the shadow of a tree.  Immediately some camel drivers came there and asked him brutally to sit at any other place because that place was reserved for king’s camels. Khwaja Sahib said that they could make the camels sit at some other place. But camel drivers were adament and became violent then he said very politely.

” Lo, we leave the place and your camel may remain sit here.”

Saying this, he with his followers made his stay at a hill on the bank of Anna sager (lake in Ajmer). Next day, in spite of their best efforts the camel drivers could not be able to make their camels to stand. It seemed that earth had gripped them. They were very much surprised. At last they went to the court of king Prithviraj.
When the king was narrated the entire incident, he was shocked. He was very proud of his bravery, but it could do nothing for him following the first miracle of Khwaja Sahib (R.A).So he ordered the camel- drivers to beg for a pardon from the Fakir. Accordingly they went to Khwaja Sahib and apologized with great respect and humbleness. He kindly said,” Go back and by the grace of God your camels will stand on their feet.”

On their return, when they saw that camels were standing, they were over-joyed.

Khwaja Gharib Nawaz (R.A) and their companions used to take bath and performed ablution daily on the bank of Anna Sagar. One day, some of the followers were stopped by the King men for taking bath on the bank of the Anna Sagar and threatened them violently, The followers returned to Khwaja Sahib and informed him about the happening. He asked one of his followers to go and fill the water in a Kuza (eartern pot). When the follower dip the Kuza in the water it sucked the entire water of anna sagar .
he brought back the kuza to Khaja Shahib (R.A) .when the king men came to know about this they were taken aback .the entire city was shocked and it was known to every body thet the muslim saint made the pond dry because the king men threatened the muslims at anna sagar at last a delegation of civilians came to him and requested him for pardon Khaja Shahib (R.A) was kind enough and he poured the water back in the pond and the pond was again filled up.

Seeing the miracle large number of people changed their faith to Islam and Islam gained spreading in Ajmer.

Khwaja Sahib (R.A) accelerated the peace of his work of preaching of Islam . Allah had gifted him a very impressive personality and effective way of teaching and a heart full of sympathy, love for mankind and good manner that is why once a person came in touch with him developed great liking for him, people started coming in groups and accepting Islam, Hence thousand of people were enlighten with Islam two main person who accepted Islam diving this time were Shad doe and Ajay pal Jogi.

Shadi Deo was on learned men of that time and tried to face Khwaja Gharib Nawaz (R.A) but mere glimpse of this Wallie changed the heart and life of shadi deo and he fell on his feet and accepted Islam .he was name as Saad by Huzoor Gharib Nawaz (R.A).

Thus we see that Khwaja Gharib Nawaz (R.A) had no armies and did not come to conquer any Indian territory but he conquered the heart of Indian. A grand spiritual victory that must stand high such a marvelous miracle it was the “WILL OF ALLAH” and “BLESSING” of NABI HUZOOR (S.A.W) to achieve such a unique victory a new approach Was necessary and was given by Khwaja Gharib Nawaz (R.A).
He did not come India with the object of political explotion or rule but his object was to deliver the simple message of peace, love and harmony and he totally succeeded in injecting it in the heart of Indians and his success was because of his own inherent spritual strength and the charactiestic qualities of Islam in spite of all bitter and might opposition.