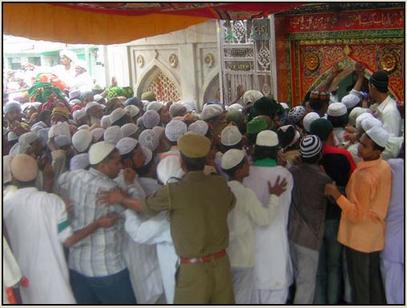 On the west of the tomb and marble screened enclosure, the Jannati Darwaza is situated, which has silver coated shutters. It is said that whosoever performs the act of crossing the gate towards the holy tomb and then walking along the side of the marble wall, emerges into the open courtyard through the exit door on the south and then continue walking keep to the right reaches the Jannati Darwaza. If you repeat the performance six times (this gate should be crossed seven times only) is sure to secure a place for himself in heaven. These seven rounds should be at one stretch. 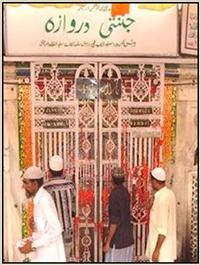 The story goes that the great devotee the Principle Khalifa and Successor, Hazrat Shaik Qutubuddin Baktiyar Kaki R.A. who had always held the feet of his peer-0-murshid as paradise itself in an ecstatic mood granted his boon to the gate. Anyone irrespective of clan, creed and faith may perform the act of crossing the Darwaza seven times in succession and reap the benefit of the efficacy of the boon. 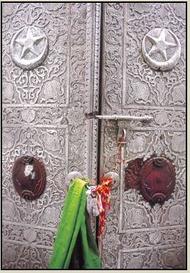 The Jannati Darwaza is opened four times a year.The details of opening are as under

1.) From the 1st Rajjab to 6th Rajjab every year, while the Urs celebrations last.

3.) On the 6th day of Idul Fitar when the Urs Sharif of Hazrat Khwaja Usman-e-Harooni, Peer-0-Murshid of Huzoor Gharib Nawaz. The gate is open part of the day only from early morning to 2:30 P.M.

4.) On the 10th of Zilhijja the Jannati Darwaza is opened from early morning to 2:30 P.M. after Zohar Prayer. Annual Urs commences with Flag Hoisting at Buland Darwaza.

Urs of Khwaja Gharib Nawaz (R.A.) is celebrated every year in the first week of Rajab, on seeing the moon of Rajab, the seventh month of the Islamic calendar. On the appearance of the moon for the month of Rajab, there comes a change in daily routine which is generally held at the Holy Shrine. The main entrance of the Holy Tomb which in ordinary days is closed at night, is kept open throughout the day and night (barring for 2 or 3 hours at night) during the six days of Urs. All other daily and weekly programmes are suspended and few functions and ceremonies commence from that night.

drums are beaten to herald the commencement of the annual ceremony. The permanent Chauki (troupe) of qawwals arrive, and after Maghrib (sunset prayers) sit in-front of the Shrine and sing the following verses:

(Felicitation to thee for this blessed and majestic assembly; salutation, ‘Oh Saqi for your bountiful goblet of sacred wine).

(Oh God, may this Shrine of the beloved exist till the last day,
may this refuge of the poor remain forever!)
Qul Day ( Final Day)

Qul ceremony takes place on the last day of Urs which is also the sixth day of the month of Rajab. This is considered to be a very important day. After the morning prayer, people start gathering the Holy Tomb. The activities include a recital of Quran, Darood, Shijra-e-Chishtia and other verses. People also tie small turbans on each other’s head and pray for the benefit of the people, for peace, prosperity and happiness.