Al though Haroon was a small town but Allah was kind enough to its people and showering his blessings on them in those days. Hazrat KHWAJA SHAIKH USMAN HAROONI (R.A) was there and its presence was filling the town with prosperity and blessing of ALLAH. 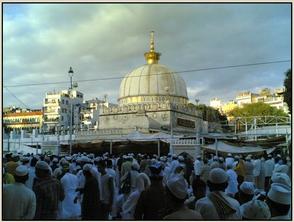 Hazrat Sheikh Usman Harooni (R.A) was among Mashaik –E-Kubra and people from far and near were gaining their desires fulfilled from him.

At last his love and passion for truth made him reached to his goal i.e. he entered Haroon town, he was overjoyed as he found the sources of eternity our Khawaja Gharib Nawaz (R.A) became disciple of Hazrat KHWAJA SHAIKH USMAN HAROONI (R.A) and the Pir-E-Kamil accepted him as the Murshid . Khwaja Gharib ‘Nawaj (R.A) narrated the entire episode as follows:-

I presented myself in an assembly where august personalities were gathered and were sitting with great respect.

Then he asked me:

I sat down with great respect facing Qibla.

He then asked me :”Recite Surah Baqar”.

I obeyed him. He then ordered: “Recite Subhan Allah sixty times.” I did it . Then Huzoor hold my hand with his hand ,looked at the sky and said:

At the end Hazrat KHWAJA SHAIKH USMAN HAROONI (R.A) put a special Turkish cap, called Kulah-e-chahar- turki on my head and awarded me a Chugha-e-Mubarak (gown) to put on and then asked me to sit and I sat down. Now he instructed me to recite Surah-e-Ikhlas a thousand times. When I finished, he said,”Our Mashaik complete a mushahida of a day and night, so go and complete the mushahida for the same period. In obedience, I spent one day and one night in prayers and worshiping Allah. Next day I presented myself before him. He asked me to sit and I sat down. He said, ” Look into the sky “. I did. He then enquired. ” As to where do you see ?”.

He instructed me to look into the earth. I followed. He then asked the same question : “As to where do you see? “.

I said, “Upto Tehtussara.” He said, “Recite Surah Ikhlas a thousand times. ” When I completed , Hazart asked to look into the sky. I looked and said, “I clearly see till Hijab-e-Azmat.” He then asked me to close my eyes. I obeyed. Later he put two fingers before me and asked, What do you see?” I replied, eighteen thousand universes are before my eyes.” As soon as I completed the sentence, he said,” Now , the job is over”.

Later on, he pointed towards a brick, laying in a corner and asked me to remove it. There were some dinars under it. He instructed me to distribute them among the poors, and that I did . At the end he said :”Be with us for a few days.” And it was a pleasure for me to be with him.

Hazart Gharib Nawaz (R.A) lived in the service of his pir-o-murshid for a long time and in this period he wrote a book named ” ANIS-UL-ARWA” in which he fulfilled the behest of his spiritual guide and teacher and Hazart Khwaja usman harooni (r.a) made him his Sajada nashine or descendent and To him the holy relics of holy prophet Mohammed, (S.A.W) which were handed one to another in the chishti order.

After getting the fruits of his services from his pir-o-murshid. Khwaja Gharib Nawaz (R.A) left on travel in search of truth and peace and would spent most of his time in prayer and devotions of Allah.