Prior Life of Prophet Muhammad 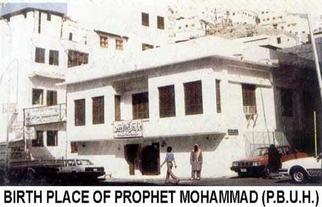 The Beloved Prophet Muhammad’s (s.a.w.) life prior to Him receiving revelation of him being the divine  Messenger .
The extraordinary events took place on the night of his birth. For example, most of the idols at the Ka‘ba toppled over; the palace of the Sassanid Emperor shook and cracked, and its fourteen pinnacles collapsed; the small lake of Sawa in Persia sank into the earth, and the fire which was worshipped by the Magians at Istakhrabad and had been lit continually for a thousand years was extinguished. Together with these events, the different character he displayed even in his childhood and the meaningful signs men of insight observed on him meant that he would undertake a great mission in future.

During the period of his life prior to his Prophethood, he opposed injustices in his community and joined organizations like the Hilf al-Fudul, which was established to defend the helpless and restore usurped rights to their owners.

Although of honorable descent, he never lived in luxuries and grew up as an orphan under the protection of first his grandfather and then his uncle. Although he may have earned some money by the trade he did before and after his marriage, he used to spend whatever he had to support the orphans, widows and the poor and therefore never lived a wealthy life and did not have powerful backing.

Despite the moral corruption in his community, he lived an extraordinarily chaste and perfectly disciplined life, without never falling into dissipated ways. During his childhood, he intended only twice to attend wedding ceremonies but on both occasions sleep overpowered him half-way. When he was 25 years old, he married Khadija, a respected widow fifteen years older than himself and never married again until her death 25 years later. Those who knew him said that he was as shy as a young girl when asked for in marriage.

Muhammad’s childhood and youth were a prelude to his Prophethood. Besides his other exalted, laudable characteristics, everyone agreed upon his truthfulness and trustworthiness

Muhammad’s childhood and youth were a prelude to his Prophethood. Besides his other exalted, laudable characteristics, everyone agreed upon his truthfulness and trustworthiness. He never lied, never cheated and never broke his word. He was called ‘the Trustworthy’ even by his bitterest enemies.

People would say of him: ‘If you go on a journey and need someone to whose safeguarding you will entrust your family and belongings, you can entrust them to Muhammad without hesitation.’ The Ka‘ba had been partly ruined by rain and resultant floods. The Quraysh restored it. The moment came when the Black Stone had to be put back in its place. It would be an honor for the individual or clan who did that since the Black Stone was revered for its sanctity. In order to prevent a clash which was about to ensue between the clans to acquire that honor, they all agreed on the arbitration of Muhammad. He asked them to fetch a piece of cloth, which he spread on the ground. Putting the Black Stone on it, he told the chiefs of the clans to take each a corner of the cloth. In this way the Stone was raised to the required height and then he took it himself and put it in its place. Thanks to his wisdom, the danger of a war between the clans was averted.

Muhammad learned from no one during his whole lifetime and was never influenced by the written culture of the time.

Muhammad was unlettered. He learned from no one during his whole lifetime and was never influenced by the written culture of the time. Towards his fortieth year, he used to retreat to the cave of Hira.’ This unlettered man came out of the cave with a new, wholly authentic message to heal all the wounds of humanity and challenged all the literary geniuses to produce a like of his message. This alone is enough to show that he is a Prophet sent by God to guide humanity to truth.

No one among his enemies dared to accuse him of lying or cheating.

No one among his enemies dared to accuse him of lying or cheating. In order to prevent the spread of his Message, they only labeled him sometimes as a poet, sometimes as a sorcerer or magician and sometimes as an insane one. There were times when, in order not to accept his Message, they put forward false pretexts, saying: ‘If only this Quran had been sent down to one of the great men of the two cities (Makka and Ta’if)?’

It is inconceivable that a man of forty who, until then, was never witnessed to tell a single lie and to cheat, and to display any moral and intellectual imperfection, would completely change, suddenly and unexpectedly, and begin to cheat everyone and continue to do so without being discovered. As prior to his Prophethood, no one, including his bitterest enemies, ever accused him of lying and cheating, so also after it, though they uttered different slanders about him, they could not help but confess his truthfulness. If they had ever witnessed any dishonest act by him, or if, to answer his challenges, they had been able to produce the like of a single chapter of the Quran, in order to discredit him or stop him preaching his message, they would not have felt obliged to wage war on him. However, after years of futile resistance caused by low and selfish motives, even his most bitterest enemies like Safwan ibn Umayya, Abu Sufyan ibn Harb, ‘Amr ibn al-‘As, Ikrima ibn Abi Jahl and others, finally accepted the truthfulness of his message.